It all began when Vasantha Rajagopalan, a proud mother of two, talented singer and semi-professional artist performing shows, on television and All India Radio in the 80’s - decided to look beyond music. A passionate and skilled singer, she started conducting music classes and performed at various locations in the 1980s, and what started off as a humble music class with just two students grew to the size of a music school with over 120 students in the span of five years. ...

This is when her husband, S Rajagopalan, who ran a shipping business of his own, noticed her potential and asked if she wanted to venture into the world of business with any product she was comfortable with. Vasantha was particular that whatever business she would run, it would only concern products and services for women. The trigger that made her start Athreya was her bad experience with a street corner blouse tailor who was rude and delayed her blouses. One day, she literally challenged him to start a blouse business and thus began Athreya.

So that day, she went back home and discussed with her family, and that's when she realised based on her research that there is no organised boutique that sells either readymade blouses nor does tailoring services except for larger brands which used to sell it as one of the products amongst the 100 other products they used to sell. It dawned on her that there was no exclusive shop catering for the need of readymade blouses in Chennai.

The couple then invested ten thousand rupees to buy two machines and material to start making readymade blouses out of their house, where they just attempted to make the blouses with the help of one old master and assistant boy. She tested these products amongst the parents of all her music class students, who gave her very good feedback and encouraged her to proceed with this venture in a larger manner.

Athreya blouse store – The first exclusive blouse store in Chennai was born. We were the pioneers in this. The word spread like wildfire and customers started flowing in and our average inventories grew from the hundreds to the thousands. ... 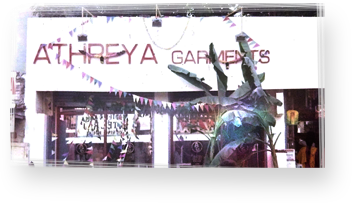 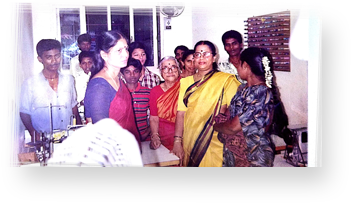 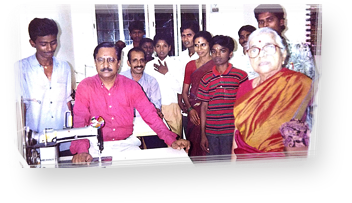 As the news spread around Athreya had visitors from all spheres of life. We were the then favourites of the Tamil daily, and also it was the time when cable TV started and also our dear SUN TV and Raj TV had just come into existence. They were all hungry for content and our uniqueness in setting up this business played right into their interests, so we were covered by all the TV channels and popular Tamil magazines like Kumudham, Mangaya Malar and so on.

By this time the company slowly became organised and set up a production department, the creative department was still handled by the family. Since the focus was more on ready-made blouses, we had recruited a small in-house embroidery artisans and customer service manager who spoke to the customers and brought in the feedbacks. ...

Based on the feedbacks, Athreya started creating various designs in blouses using standard 2x2 material which was first of its kind then. The designs were even given interesting names such the names of the girls in Vasantha and Rajagopalan’s family, such as Aparna (their daughter) and Kavya (their granddaughter), a tradition that carries on to this date.

Athreya became an important part of the festive celebrations of many families during its growing years, with seasons like Navarathri, Deepavali, Christmas, New Year and Pongal seeing the highest footfalls and a store brimming with people. It was during this time exports of our blouses began to various countries like South Africa, Singapore, Malaysia, Middle East catering to the Indian community worldwide.

In early 2000, with the birth of the large format saree stores came into being and they changed the way the sarees were sold. Now the Sarees were sold along with their matching blouses as against earlier times when ladies had to take the sarees to the fabric shops for matching. It is at this time Athreya had to slightly shift their rigid stands from producing only ready-made blouses to taking in orders for tailoring services. This opened a completely new plethora of segments for Athreya.

Fast forward to 2012, Mrs.Deepti Prasanna (daughter- in-law) had entered the business to handle the new age fashion and the growing expectation of the customers. Since she had a strong finance background, she added immense value in developing various MIS and insights into the business which helped in setting the new course for the Athreya journey. ...

As the company began to grow, so did the fashion industry and its styles, and so Athreya decided to venture out into the world of designer blouses as one of the pioneers in the market then. We initially set up an exclusive embroidery unit tied to our requirements and started engaging with budding stylists and designers from leading fashion schools to produce latest designs.

Keeping in mind the fast pace changes in the market expectation and the growing e-commerce mania, Athreya had taken a bold decision to shed its old conventional image to a brand new avatar and refurbished store and addition new website with a sound social media strategy. Now, Athreya caters to three segments Essentials, Exclusive and Bridal along with various value added services such as Bridal lounges, Bridal styling, In-house designers E-commerce platform and many more to come. We have also tied up with various wedding planners, wedding portals and some interesting jewellery design studios to our customers.

Athreya's large vision to have “An Athreya Blouse in every Indian woman’s wardrobe” is the new mantra and we are striving towards this audacious goal.

Please come along, experience our store and blouses and be part of our journey forward.